This may be my last scouting trip of the summer, the season is changing from summer to fall and the hunting seasons are starting to open. Although I don’t archery hunt yet, I do plan to rifle hunt in one of the early September rifle hunts when it opens in a few weeks.

I was able to leave my house on Tuesday August 27, 2013 at about 6AM. I was heading into a new area to scout for 4 days and didn’t see the need to try and get there at first lite. Also I like to be able to look over the country as I’m driving in to a new area. I saw a nice Buck in the road on the way in at about 10AM, go figure! He had a big forky type of frame with some tripod points and small sticker type of stuff going on. Not a real big Buck, but great character and a great start to the scouting trip. About a 100 yards down the road I saw 2 Does. 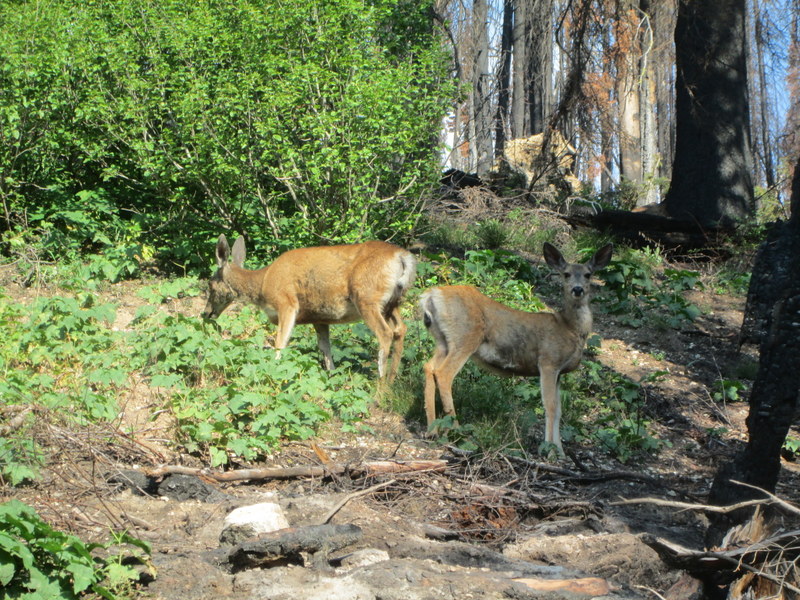 Another 1/4 mile down the road I came across a freshly fallen tree across the road. I forgot to bring my saw, so 45 minutes later and with my machete I was able to clear the road and continue on. The other 2 trees I encountered after that, I was able to just drag out of the way. 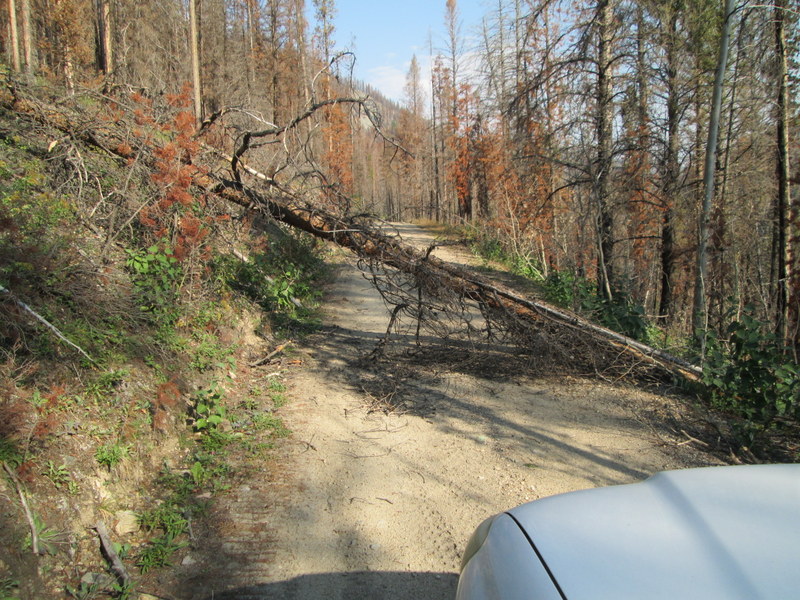 I finally made it to the trailhead at about noon and the hike in was uneventful and hot. When I got to the location for the first nights camp I had picked out, it was not as I expected based on maps and google earth. This is usually the case and I overcame this by just simply stocking up on water and heading for the easily accessible high ground.

The next morning It rained violently and fog rolled in and out. I was able to glass in between the fog banks from my shelter.

After the storm cleared I looked over the terrain and found the next vantage point I wanted to camp at and glass from. It was about 2 miles away and a little higher in elevation, and would allow me to check out some new area as well as the good looking pocket I was already glassing that morning.

As I hiked up the ridge I started seeing some Deer and Elk sign, but more deer sign. The area in general didn’t hold a lot of animals and I didn’t see much sign at all up til this point. It was apparent that an Elk had traveled this ridge probably a month ago, and Deer had been on the ridge within a week. I even found some permanent beds that get used year after year. With high hopes I set up camp on a nice little bench just below the ridgeline and hiked to the top of a rocky peak to glass until dark. 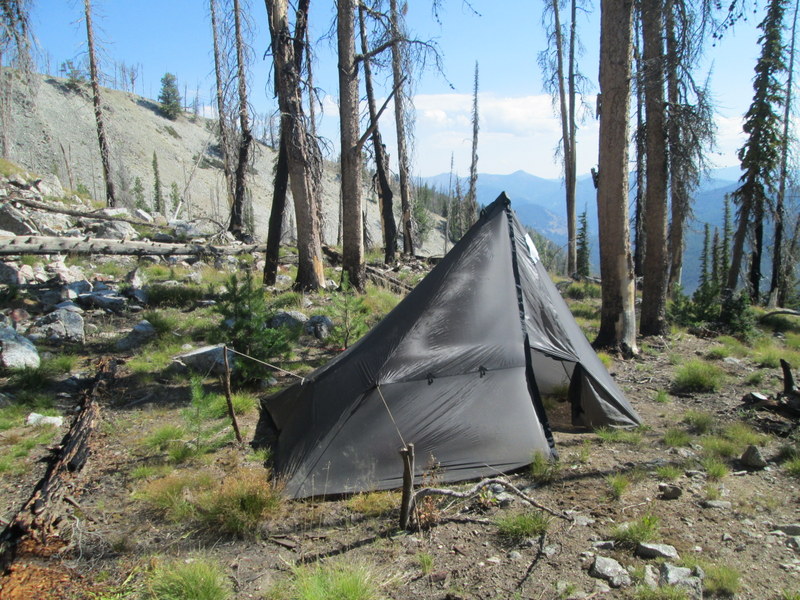 From this peak I was able to see a lot of good looking country and it was almost overwhelming glassing from it. There was a lot more Deer tracks and sign around that peak and some nice beds right on top where I was sitting. Once again however, I glassed until dark without seeing anything. This is just how it goes sometimes when your in a new area.

The next morning I glassed from the same spot but focused more on the sunny southerly slope on the other side of the canyon. About 9:45 I spotted 2 deer heading up slope to bed for the day. They where over a mile away and on the move so I was unable to get a real good look, let alone a picture. One of them was for sure a Doe and the other was a small Buck following the Doe. At one point I saw a third Deer but couldn’t make out what it was before they all disappeared into their beds. Big Bucks don’t usually travel with Does this time of year so I didn’t have high hopes, but I was glad to have finally seen some animals. I contemplated staying in that location for another day, but decided to move on and see some more country. If I was hunting I would probably take it slow and stay, but since I’m scouting a new area I want to cover more ground so I can size up the area better. I glassed the rest of the mountain that the deer where on and found a good way to get up to a vantage point about a mile above them further up the ridge. This way I could glass the next canyon over and glass back to the other parts of the mountain I was on as well. This was about a 2.5 mile hike with a quarter mile section across a boulder slide. Even with the cloud cover hiking across this wide open rock pile is less than ideal but it was the most efficient route. I would have to go all the way down to the bottom of the canyon to go around it, so I took the gamble and hiked out in the open. 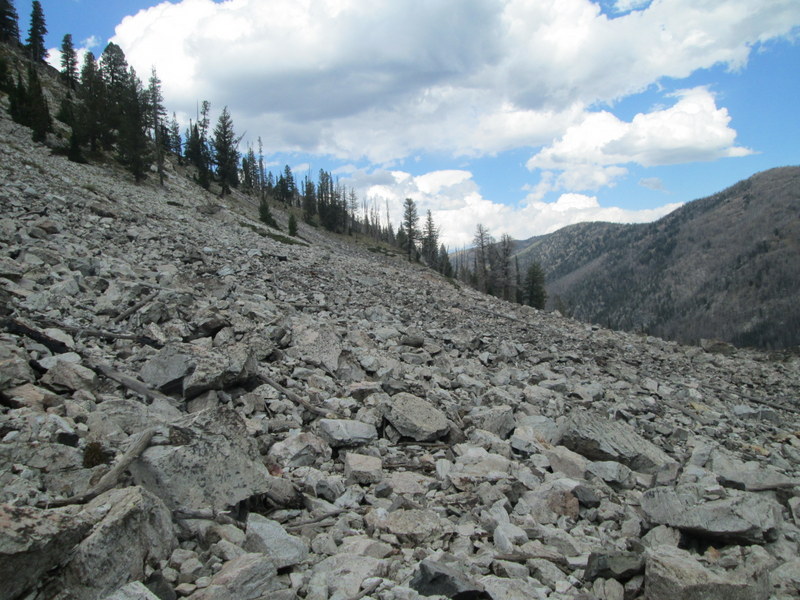 When I got to the tree line I followed it up towards a low saddle that would get me on the main ridge. I was now on the same mountain as the Deer from that morning, but about a mile up the ridge. I didn’t see much sign, but the terrain looked Bucky. Especially the dirt, it was that white sandy type of soil that Bucks like to bed in. As soon as I completed that though, and was within 60 yards of the top of the ridge, I looked up to see a nice Buck jumping out of his bed. In 5 steps he was on the top and broadside having a staring contest with me. I knew as soon as I went for my camera he would bail, so I sized him up first, then went for my camera. He walked over the crest of the ridge without little care. I quartered away from him slowly and casually in a submissive manner. I got about 30 yards and looked up to see him checking me out from behind cover. He must have came back to look. I was able to zoom in and get some pics at that point. I don’t think this Buck has seen any hunters or humans in his life thus far, he didn’t spook that bad at all.

I caught glimpses of him as he slowly walked away over the crest of the ridge. I went ahead and continued on with the original plan and hiked a little farther down the ridge away from the Buck to make camp. There was not much more I could do at that point, I found the ridge the deer like and I found the Buck. I also found one of his previous beds and it was a fortress. There is no way he could have ever been seen in this bed. 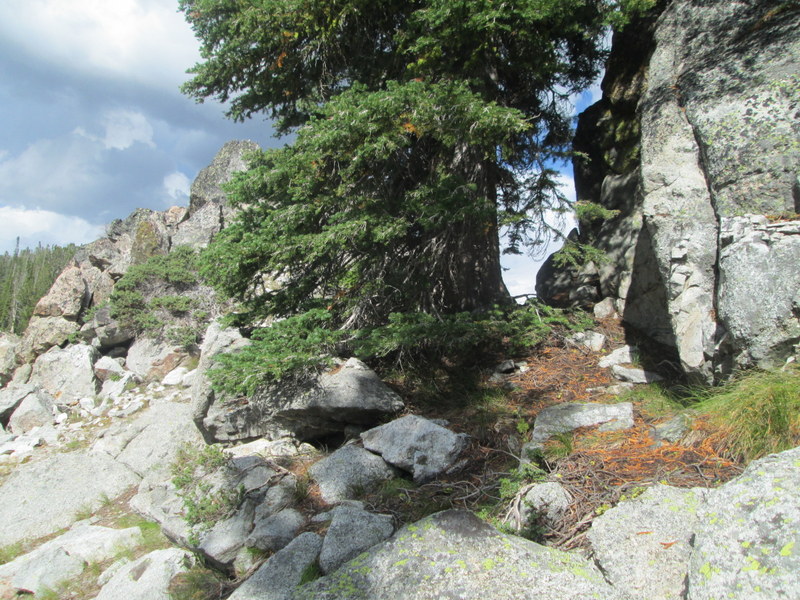 I glassed as much as I could that evening putting emphasis in the direction I though Frank might of went as well as glassing new area. Again I glassed til dark and didn’t see anything that evening. The next morning I glassed some new country and glassed the direction Frank went and still didn’t see anything. I had to wrap it up by 9:30AM so I would have enough time to hike out. I heard a few wolves howling in the next canyon over. It sounded like they had come up empty for their morning hunt and where relocating each other. It doesn’t surprise me, that area was fairly desolate of Deer and especially Elk based on the sign I saw. I opted to descend the slope in a manner that would conceal me from the Buck in the off chance that he was back in the same spot. This meant 1000 feet of cross country down to the bottom and an extra 1000 feet back up on one trail to another. The trail was in bad shape and not being used, this was worth knowing and encouraging. I didn’t see very many animals on this trip, but what I saw I liked and I will be going back to hunt and be carrying a Wolf tag in my pocket as well. I now know what kind of terrain and what mountain the deer like in this area and once again the time spent scouting pays off.