On September 14th 2013 I headed out for the first hunt of the season. This was the General Season early rifle hunt in one of the Frank Church Wilderness units. My scouting trip into this area a few weeks earlier yielded very little results. It took 3 days to find a Buck and Elk sign was nonexistent. Based on this scouting trip, I opted to not buy an Elk tag for this area and decided to focus on Deer and Wolf for the hunt. I intended on going back to hunt the Buck called Frank but plan A was quickly foiled by road conditions. Although my truck is capable enough to have crossed this, I decided to play it safe due to the pending rain in the forecast. It could easily wash out to a point that wouldn’t allow me to get back while I was on the hunt and then I’d be screwed!

This is a great example of the importance of plan B and sometimes plan C. I had only physically been into the area that was on the other side of this washout, but I had scouted other areas on the map. When I see Deer off the road on the way in to an area I plan to scout, I take note and study the map of that area as an alternative for next time. For this occasion I had actually seen a decent Buck cross the road in another area, so I had no hesitation in where to go next (plan B).

He wasn’t a very big Buck, but he had character and I’m more than happy with that. I will call him the Tripod Buck, for the tripod of points he had on one side and I knew he would be near where I had seen him cross the road because that was part of his home range. I reviewed my map and picked out a location that would give me a good vantage point, especially a good view of the ridge I had seen him head for 2 weeks or so earlier, and started hiking. 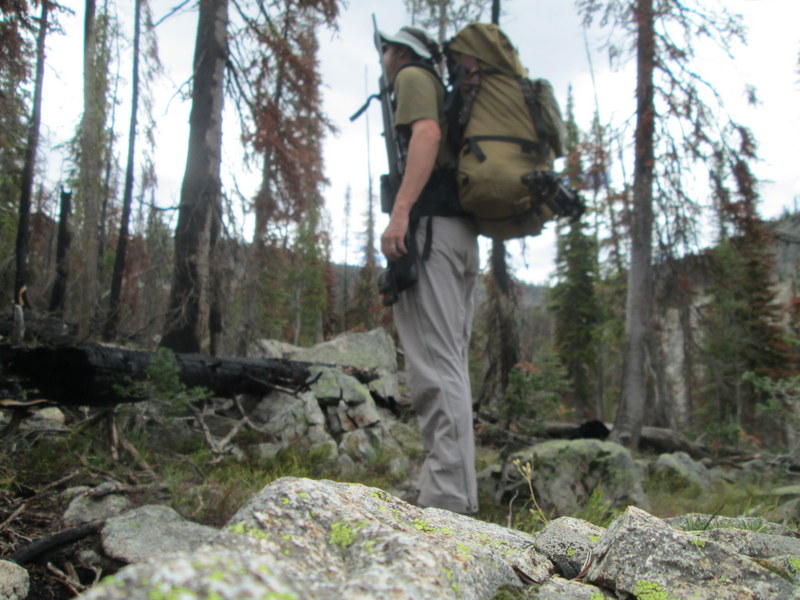 It was a slippery initial hike due to the steep loose ground and I had to cross a rock slide again. Crossing these rock slides is starting to equate to seeing Deer on the trip. 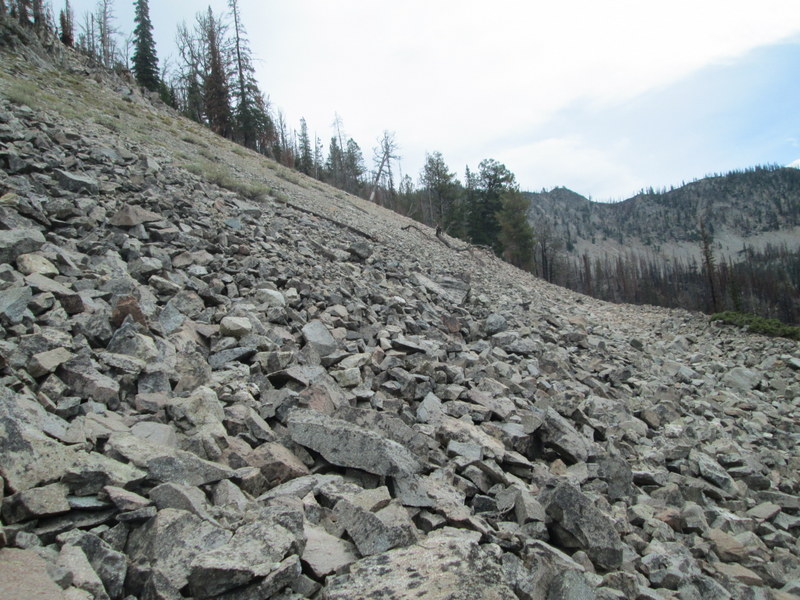 When I made it to the top of the ridge I started looking for a flat enough spot to make camp. This was difficult and I ended up having to hike a little farther along the ridge than I really wanted to, but I found a great little bowl that had some flat ground, protection from the wind, and a view.

I found a relatively flat area that wasn’t in the path of any widowmakers and set up my BCS2. It was mid afternoon by now and so I took a rest once I got situated. I really like the convenience of the dual doors on the BCS2.

After an enjoyable rest I headed up the ridge above camp to find a glassing location. Despite the vantage point I was on, I wanted to look over the basin and ridge where the Buck had headed to first. In the last ten minutes of light I spotted 2 Deer heading up hill about half a mile directly across the basin from me. I watched them through the spotting scope as long as I could before it just got to dark to see. I could tell they where Bucks, but couldn’t get a good look at them. The lingering glare from the sun combined with the distance was just a little more than my spotting scope could handle. Despite the darkness, when they skylined themselves on the ridge I was able to briefly get a look at the antlers. One was a forky or small 3 point and the other was the Tripod Buck I had seen crossing the road while scouting. I could make out that he was about 24″ wide and looked like a 3 point on one side with some small stickers on his tines and main beam. On the other side he was a 4 point with his rear forks being a crabby tripod, technically a five point I guess. These Bucks were on the move and combined with the glare, I couldn’t get any pictures, but he had great character and the hunt was on for tomorrow when the season opened.

The next morning I got up on the peak just above camp and glassed a new basin and the slope that held the Bucks the night before. I had hoped that they would come back and bed in the same spot for the day, but it was beginning to look like that wasn’t going to happen. After the first hour and a half of the day I had not seen anything in the basin nor the slope, so I moved off the peak and along the ridge that split the two basins I was interested in to the next glassing spot. There where Buck and a few Bull tracks all along this ridge of varying ages. I was defiantly in an area they use. By the end of the morning I had made it to the last peak on the ridge and had a good view of the slope and ridge that the Bucks where on the night before. I still hadn’t seen anything by about 10:30 AM and I knew that they where probably bedded down by now wherever they where. I could now see that there where some pretty good timber patches in the direction they had headed the night before on the backside of the slope that would be a great place to “hole up” for the season. From the ridge I was on I could hear the ATV’s going up and down the road and I know the Bucks could too. It makes sense that they would move over the hill to a more secluded part of their range. Perhaps that was exactly what they where doing last night when everyone was showing up and also why they didn’t feed much as they went over the hill.

I didn’t want to get any closer to the area, so after my morning glassing sessionI headed down into the basin behind me to get water. There was a lake that looked fairly close, but it ended up being about a 600 foot decent and about a mile away. 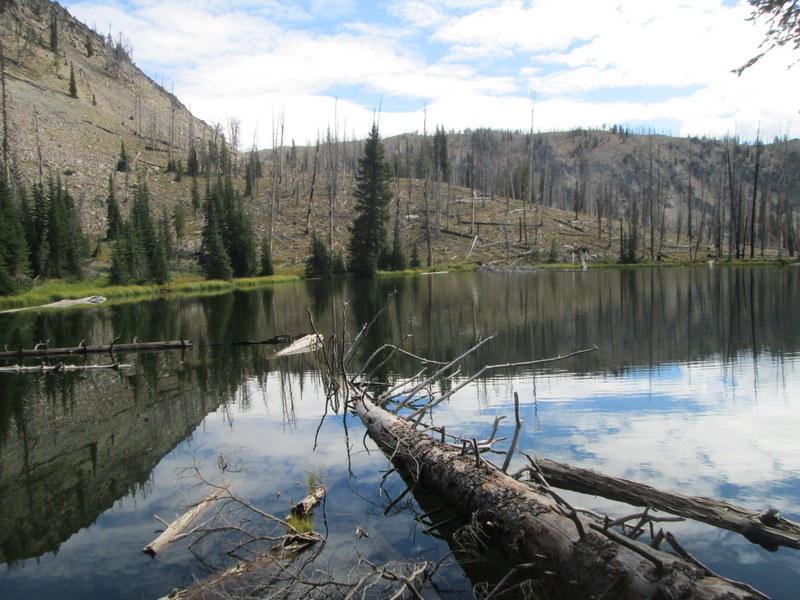 I stocked up on water, ate, and loafed around for a while. It would be a good place to camp, but then my scent would be carried by the thermals up to some of the ridges around the basin, and I would have to climb 6 or 7 hundred feet every morning to glass new area. This isn’t always real efficient and will tire you out quickly. There where a lot of fairly fresh Elk sign in the meadows adjacent to the lake and I had kind of wished I had got an Elk tag. They where in the area, but it would be one of the toughest pack outs there is especially for the smaller antlered Elk that the area is known for.

I made it back up on the ridge by about 3:00 PM and began glassing from the peak just above where I had seen the Bucks. A lot of times in Idaho I have seen Bucks get up around 3 to feed around and change beds. Even if they are still in the shade, they seem to like to change the direction they are facing due to the shifting breezes throughout the day. They tend to face downwind so they can see and hear in the direction that they can’t smell.

I had a great view of the area they where in the day before but still didn’t see anything, it was starting to get discouraging. I headed back along the ridge towards camp, with the plan now to be glassing from where I was yesterday and at the same time. I glassed thoroughly after the sun went down until I couldn’t see anymore with no results once again.

It rained a little that night and it made my shelter quite a bit heavier when I packed it up. Today was the last day of the hunt and since this Buck was not a monster, I decided to get aggressive and still hunt through the area he was in and then head back down the mountain. I glassed until about 10 AM from the usual spots with the usual results and then moved in to where they crossed the saddle 2 days prior. I wanted to find their tracks and then track them if possible. I did find a lightly rained on Buck track, but the ground in that area wasn’t very conducive to tracks like the other areas. So I just went ahead and still hunted the thicker timbered areas within a square mile in the traditional fashion for the bulk of the day with no results. This also gives me a good understanding of how the terrain really is rather than what it looks like from half a mile away. Next time I hunt this area I will have an advantage when it comes time to make a stalk.

I usually don’t expect much when hunting areas that I haven’t scouted, but this trip turned out to be another good one. I saw Bucks and learned a new area! I am looking forward to watching this Buck for the next few years, and in hindsight kind of glad I didn’t get him If he survives, he might turn out to be a really spectacular nontypical.