I got up and left my house around 3AM with high hopes of getting up on the bench and into glassing position at first light. It always takes a little longer in the morning to get going and get into position than you’d like to think and I didn’t get started glassing until around 8:30 AM that morning. In my head I can visualize me making that steep accent a lot quicker than It actually takes on the mountain. It is now August 5, 2013 and a cold front had come in and cooled things down a little the last couple days. The smell and morning chill of early fall was temporarily in the air, with the Golden Currant and Sask Berries already ripe. I had 4 days worth of food and big plans to glass all the way around that mountain if need be in order to find those Bucks I had seen in early summer and last year.

I started glassing at about 8:30 AM and caught a glimpse of a Buck  as he fed behind a tree towards the top of the mountain about 1000 yards away from where I had spotted the Rolling Stone Buck last September. I knew he was headed up hill to bed down soon so I hustled up the rest of the slope to a high point where I could see better. It was now about 9:00 AM but the morning air was still cool and I spotted 2 Bucks up higher feeding out in the open about to crest the ridge to get out of the sun. They were both large 4×4 Bucks and I was able to recognize the bigger bodied one as the “Rolling Stone Buck” from last year by his weak backs. He had grown some mass, a few inches of tines, and lost the little sticker on his left side, but had the same definitive antler configuration. Wide fronts with deep forks and weaker but taller backs. The smaller bodied one had a smaller overall rack but deeper stronger forks and was taller all around. He was going to be a great Buck in a few years with that kind of frame already. I wasn’t able to get real good footage of either one of them before they crested the mountain and disappeared out of sight for the day.

I set up camp in the usual spot, ate, and kicked back for a bit before I headed up to the high park to check my trail cam that I had set out on the “Sow and Cubs” trip.

I noticed that there were a few Deer tracks along the ridge on the way to the park, whereas last year there were more Elk tracks. The park showed the same thing, the Elk were not using the area as heavily as last year. My trail cam was about to run out of batteries, as I had expected, so I changed the batteries and the SD card. I was able to view the SD card using my camera and it had a few nice pics on it. A bachelor group of Bulls had moved through the area with the biggest looking like he was going to be a 5 point or small 6 point when he finished growing. Aside from the Bulls, I got pictures of a Bear, Does, Cows, and a Female Moose. The Moose was a surprise, that was the first I knew of Moose being in the area. After I refilled my water and ate, I headed back to camp to take a nap before the much anticipated evening glassing session.

I intently glassed the slope that I had seen the Bucks on that morning from top to bottom from about 6 PM til dark. I never saw the big Bucks from that morning, but I spotted a small 3 point at last light at the top of the mountain in the same area the Bucks had been in. 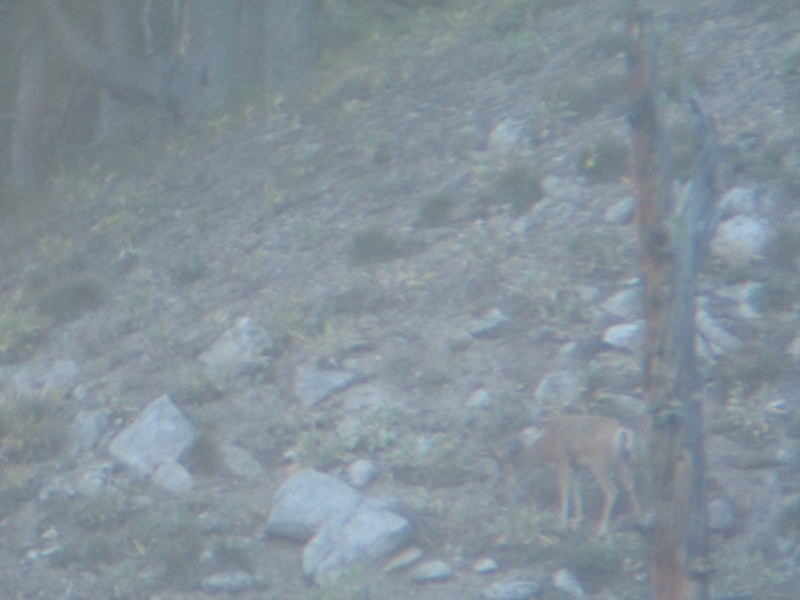 It had been a satisfying day and I slept great that night. The birds woke me up at daybreak and I got into position and glassed the same slope again to find those Bucks. I figured they would have fed out into the open again at night and I should be able to locate them again. After an hour I still hadn’t seen anything and I was starting to lose confidence. I relocated down the ridge a little where I could see the bottom third of the mountain and part of the adjoining slope. After 10 minutes or so I decided to look down towards the bottom where the Does usually hang out. I immediately saw the smaller 4 point feeding his way up hill where he bedded out in the open. I then saw the small 3 point bedded above him, and eventually the Rolling Stone Buck in the trees to his left.

I watched them all morning, taking notes on wind directions again, and I got some video and a bunch of pics as well. The small 4 point has a really nice frame and strong forks, he will most likely be a 180 buck in a couple of years if he survives. 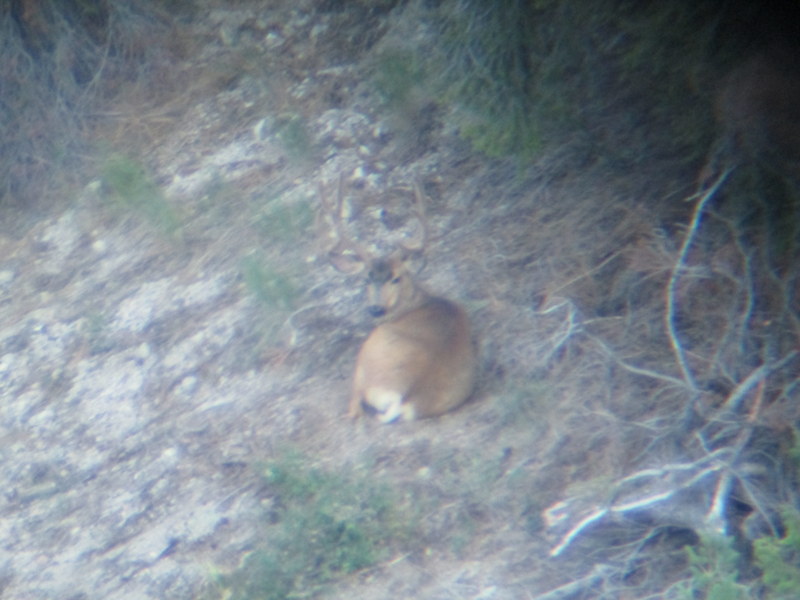 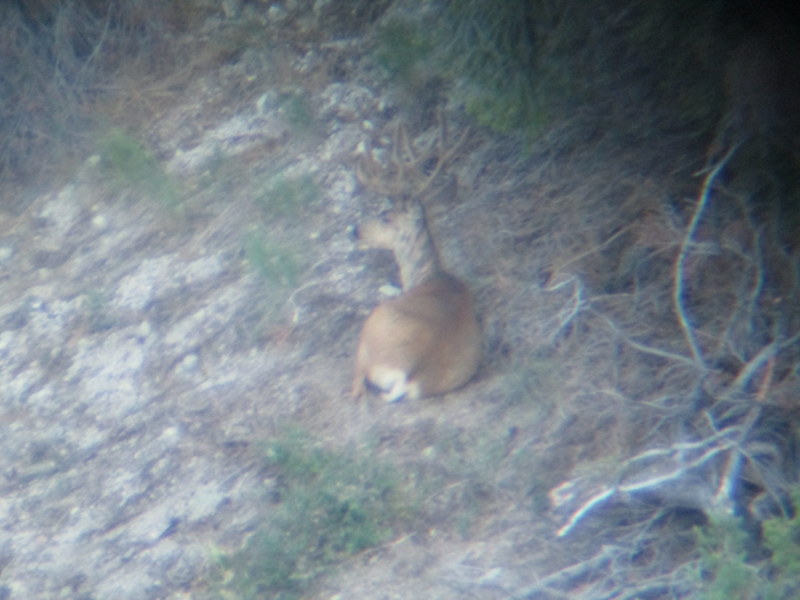 I will call him Sleepy for future reference. After bedding down he put his head in the dirt and went to sleep in the morning sun. 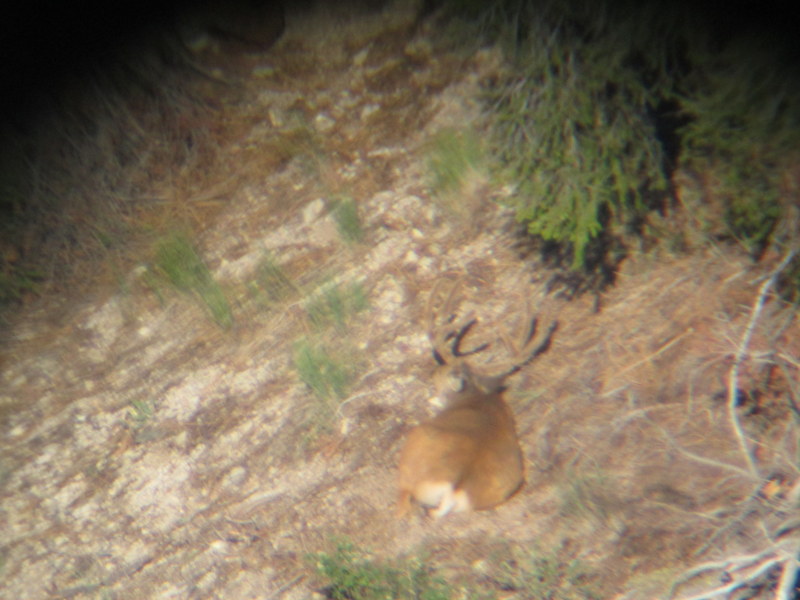 The Rolling Stone Buck has strong fronts, decent mass, good brow tines, but weak backs, especially on his right side. 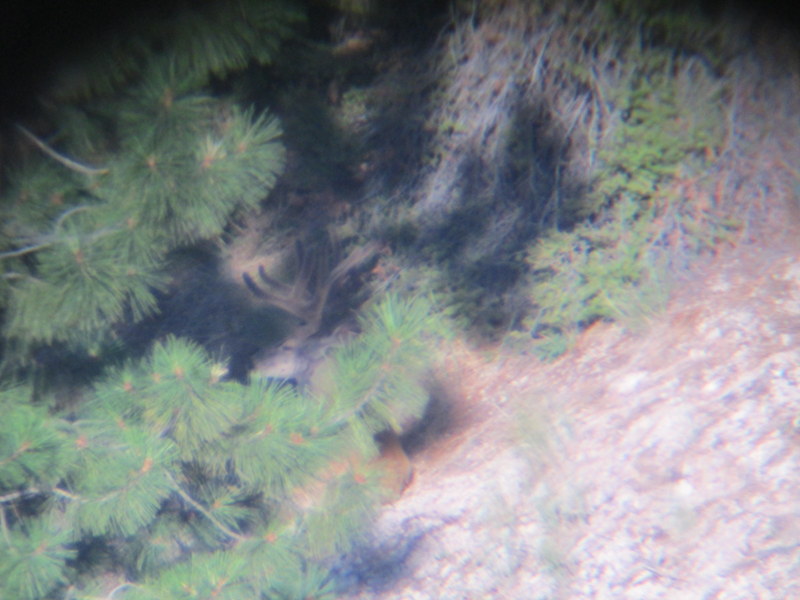 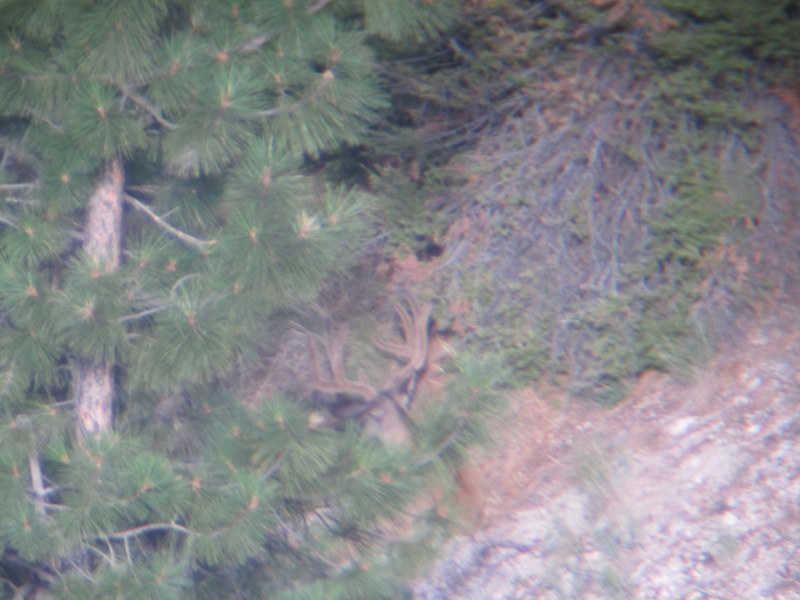 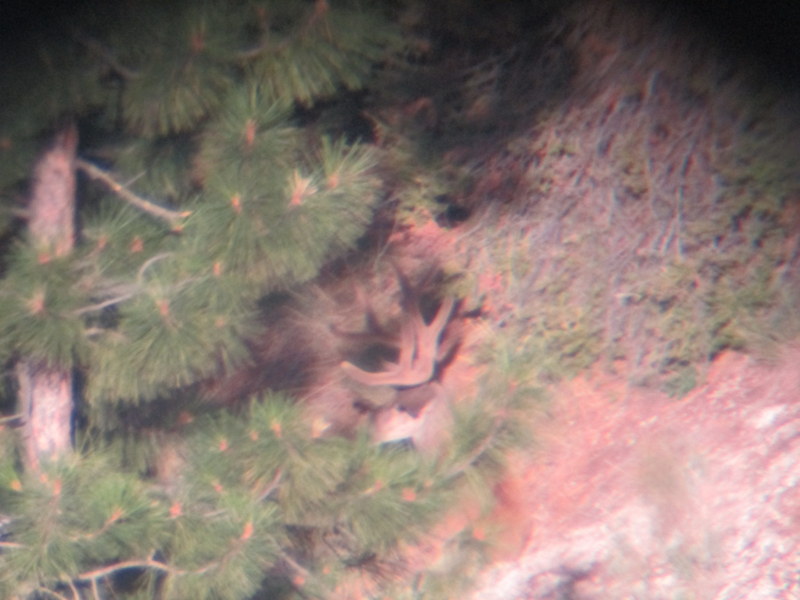 He didn’t seem to grow a whole lot more this year, due to either regression or a marginal growth year due to a dry spring. After a conversation with the area Biologist I found out it was probably the latter. Just not a great year for antler growth this year.

Regardless of score, the Rolling Stone Buck is my first candidate for the upcoming season thus far. They bedded in that spot til about 10:00 AM and then got up, and headed over to the left about 100 yards to some thicker cover that provided more shade. I lost sight of them, and didn’t see exactly were they bedded at that point. Based on my notes from the previous morning, a strong breeze was going to pick up and carry my scent over their way anyways and so I got out of there when they changed beds. I was probably only about 500 yards away across the canyon, but it seemed like about 800 or so. Well within range of their noses either way.

I packed up camp and headed back to the park to get water and then hike over into the next drainage into some new area where I had never been before. Halfway up the mountain there was a trail that came from another direction and went through a low saddle providing great access into the next drainage. I intersected it and noticed a lot of horse tracks on the trail but continued on up anyways. At the top of the saddle I was able to get cell service and check in with my wife. 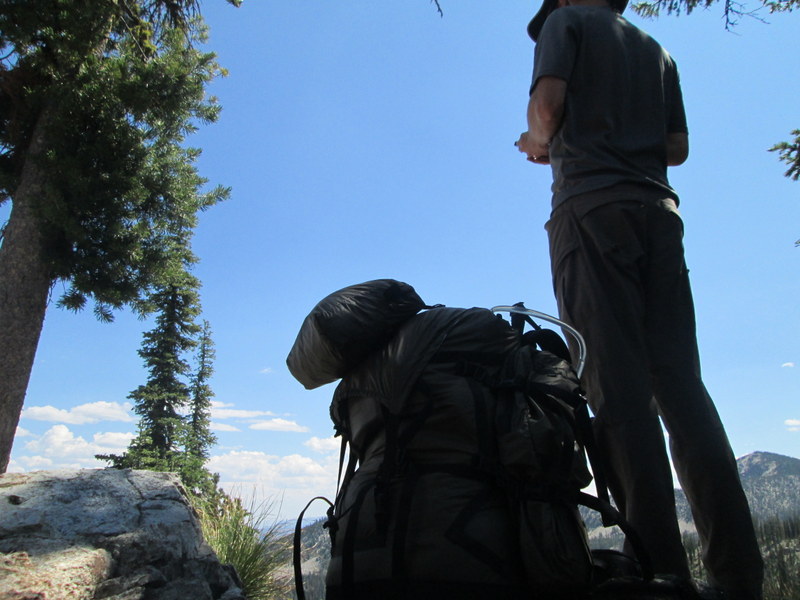 The trail dropped down into the drainage and went through a series of lakes so I left the trail and side hilled to a small basin with a little lake in it to refill water. I wanted to keep my elevation and get some distance from the trail as much as possible. After stocking up on water I continued on along the same contour increasing my distance from the trail. I spotted a narrow finger ridge that projected out from the main mountain ,this would allow me to glass into two basins and I set up camp in the trees below it. 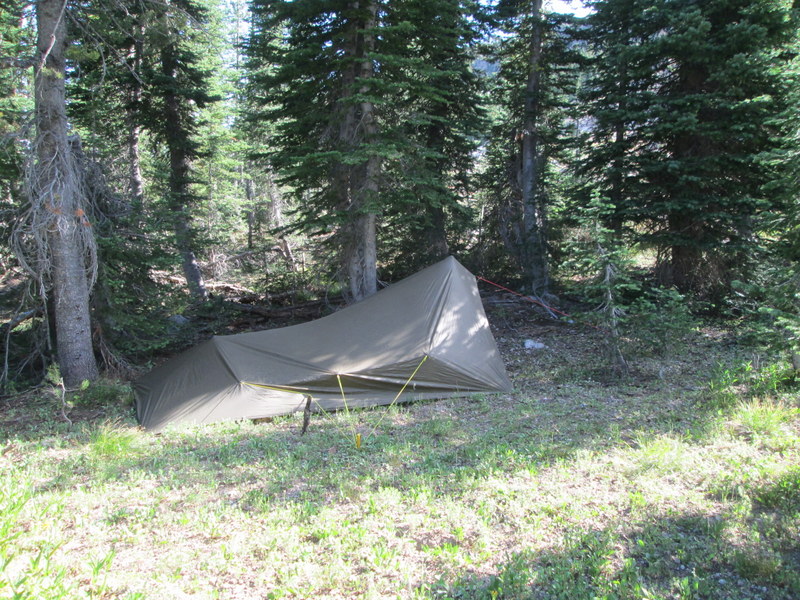 That evening I spotted 2 Does in one basin and a small 3×3 in the other. The small 3×3 headed from his bedding area down lower into the timber without stopping and I wasn’t able to get a pic. He was young and small anyway and I wouldn’t be coming back this season to go after him. If he is still there next season then I will probably start paying attention. It was becoming apparent that the trail offers good access to the area and the older Buck or Bucks that he was most likely following last year had probably got harvested.

The next morning was the same with nothing new spotted by sunup, so I packed up early and headed for the top of the main mountain. I wanted to get to the top of the mountain and see if I could glass some new country before everything bedded down for the day. I made it to the very top only to find it was timbered all the way to the top and on the connecting ridges as well. I simply didn’t have any vantage points through the trees where I could see any new country. I could only see the areas I had already glassed. I hung out on top for a while and surveyed the surrounding area. I could see that this drainage had some trails and a lot of access, too much for my liking, and so I decided to head out of there.

I was already satisfied with finding the Rolling Stone Buck and Sleepy and I got to see what the other drainage looked like as well. I have found that if your looking for older age class Bucks it isn’t usually worth your time in the long run to spend too much of your scouting time in an area that gets a fair amount of pressure. Sure you might get lucky every decade and harvest a big one that has been avoiding hunters, but for the most part they just don’t live long enough to get old in pressured areas. If they do they become almost unhuntable in their habits. Most of us backcountry hunters are going to take the biggest buck we see on our hunt. So when I see Bucky areas that only hold smaller 3 or 4 point bucks I assume some one hunted the area recently. This doesn’t always hold true but it’s a safe and efficient assumption. Most of the 160+ class Bucks I have seen or harvested were with younger bucks. These younger Bucks also tend to stand out in the open more and give away the location making the group easier to spot.

I made it back to the truck in the late afternoon, it is always quite a bit faster going downhill. I had considered staying another night on the bench and trying to glass up the Bucks again, but opted to steer clear of the area until the season opens. I didn’t want to chance the Bucks detecting me as they would probably disappear until the following year again. Between the summer Wildfires, the Wolves and the unlimited OTC tags, it’s good to have more than one option going into the season. My next trip will be to a different area to hopefully find another candidate.