I was able to get away for a 2 day scouting trip on the weekend of June 28th, 2014. This was the first Mountain Goat scouting trip and I was going into an area I had lightly penetrated a couple years prior. This time I was planning on going twice as far and focusing more on distance for this trip rather than elevation gain. I wanted to get familiar with the trail and the terrain. I’m not going to give mileage, but I will say I got a lot further than I thought I would. I now have a good idea of what spots I can reasonably scout and hunt in a given amount of time. One thing about Goat scouting in this area is that you can be effective by just hiking up the bottom of the drainage and glassing the cliffy areas. However I will still be making some hikes into the more remote and inaccessible areas when I get a chance, it’s just in my nature! 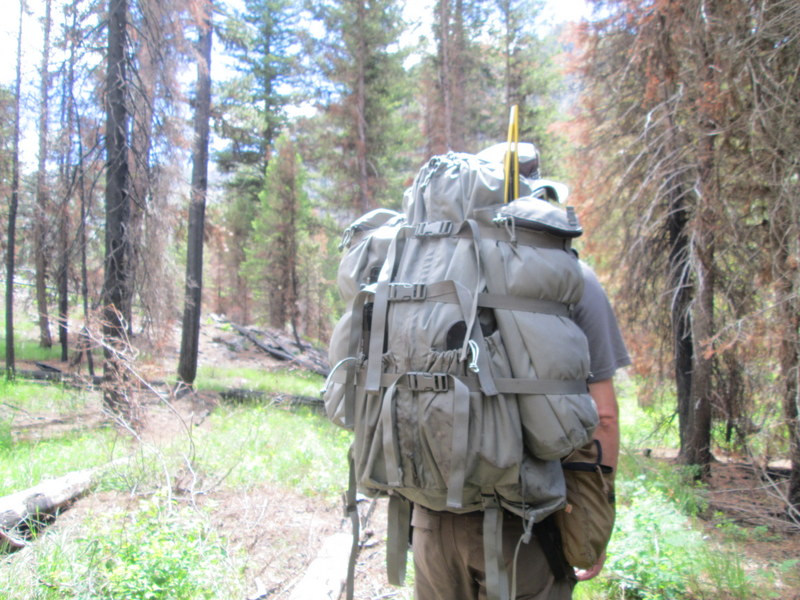 I started out of the trailhead late morning and it was sunny with patches of cloud cover. The sun was hot, but I still jumped a Doe out of a meadow a couple miles in despite the Wolf tracks in the trail. About a mile after that I took a break and glassed some likely looking Goat habitat. The parts of the mountain I had visible to me were fairly exposed and sunny and it didn’t surprise me to not see Goats this late in the morning. Several miles down the trail, I came over a rise and saw the back end of a what looked like a bear about 20 yards away. 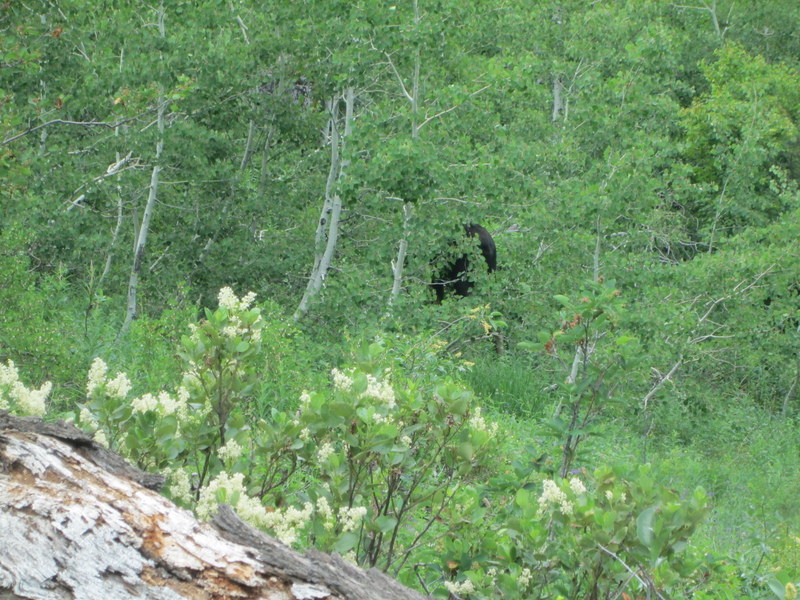 When it took a step forward, I saw a hump on it’s back, which momentarily froze me in my tracks. I then saw that it was a Moose and not a Grizzly! I don’t see many Moose in this part of Idaho, so this was a treat. 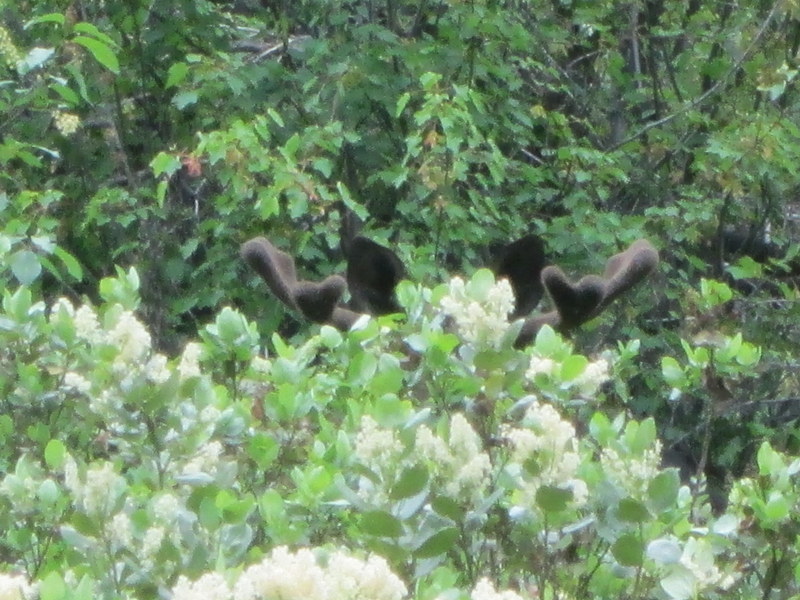 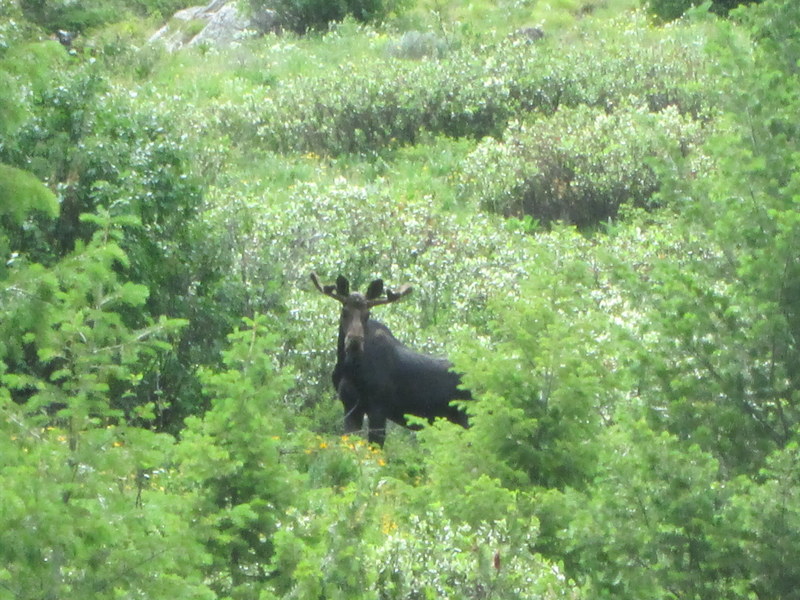 This explained the monster Elk tracks I had seen earlier, it was really a young Bull Moose.

Another mile down the trail, I saw a glimpse of dark fur across the river. This turned out to indeed be a nice big Black bear. I couldn’t get very good footage of it before it disappeared into thick brush, but I did get a few pics and video. 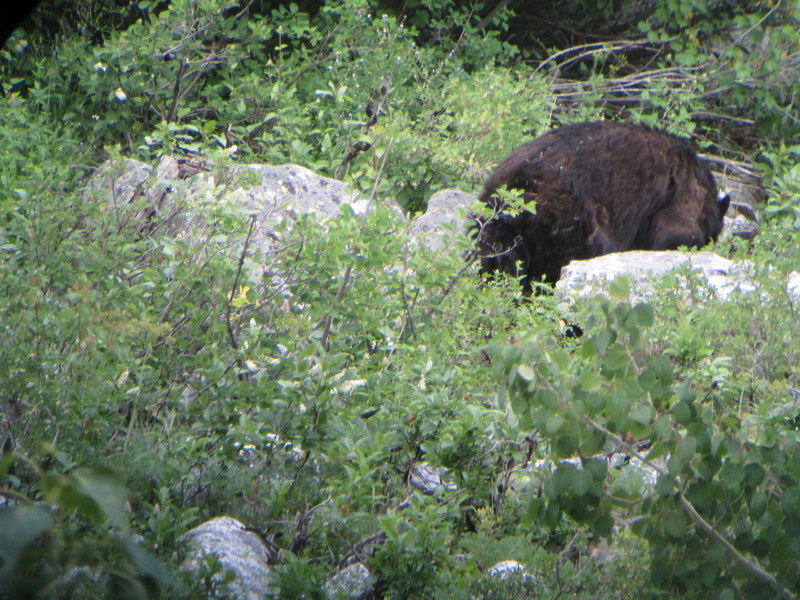 Another mile or so after the Bear, I came across a nice sized Buck track in a the trail. 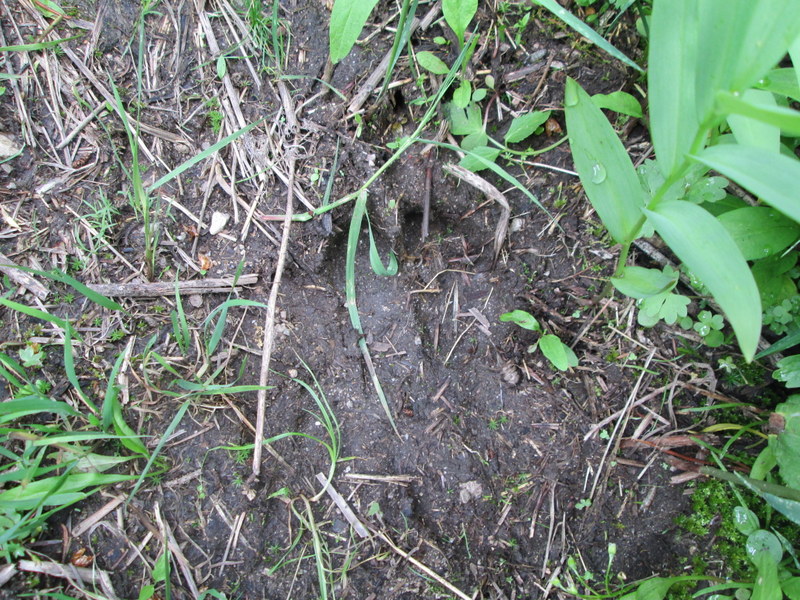 It was in a very Bucky location. The ground was moist, the forbs were waist high and the shrubs where thick. Notice the difference in flora between this pic and the Bear/Moose pics. I will be giving this place a closer look when I Deer hunt this area.

Another mile or so after this, I was finally where I initially wanted to climb out of the canyon to check out some cliffs. It was late in the day but I headed uphill along a creek anyway. I came across another set of nice Buck tracks on a timbered bench and continued up the drainage. When I got to the next bench I was still in heavy timber and started to encounter more and more snow drifts. It was getting late and there were no flat places to set camp, nor was there anywhere I could easily glass from. I had already missed some glassing time and I still had another 1000 feet to climb to get into the basin. Even then I still didn’t know what the visibility would be like. I didn’t want to risk missing any more glassing time with such a short trip so I opted to hike back down where it opened up and glass across the canyon for a while. Then hike the rest of the way down and drop camp in the bottom for the night where I could glass both sides of the canyon in the morning.

I set up and almost immediately saw a lone goat across and down the canyon about a mile away. It was on the move and I never got a good look at it. I decided to head over that direction and get into a good position to glass that area the next morning. I set up camp on a small bench in the bottom of the canyon where I could see the slope he was on the next morning. I was basically on a flat rock where stakes wouldn’t work so I had to tie off my shelter. 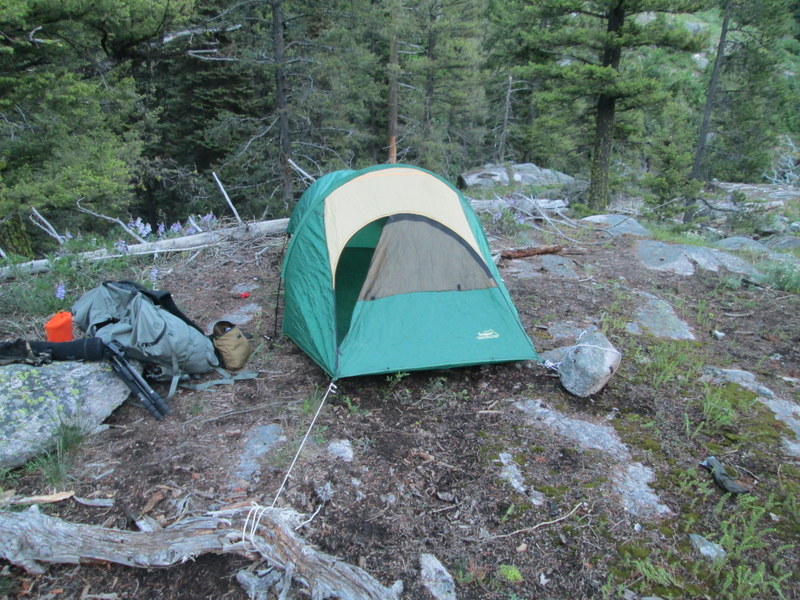 It worked and the next morning I sat against that rock my pack is on and glassed for a while. I didn’t see anything so I packed up and glassed my out of the canyon. 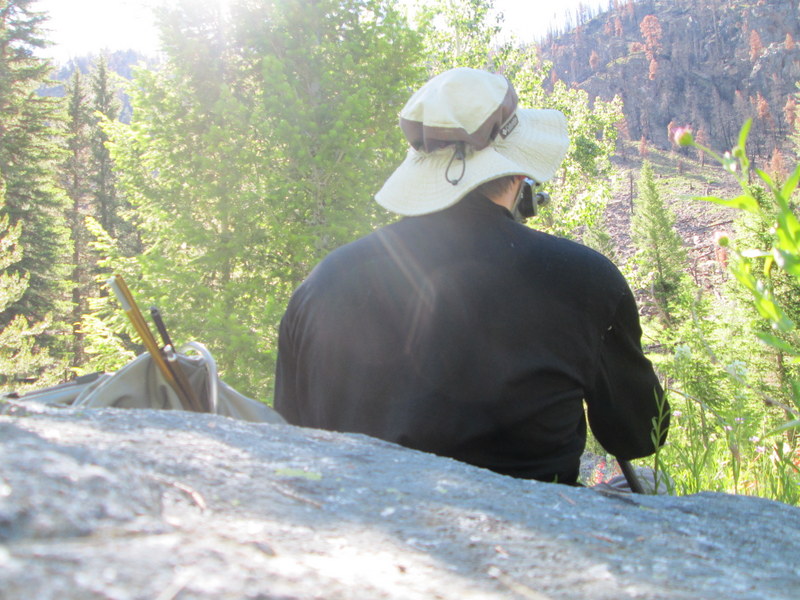 As soon as the sun hit the bottom of the canyon it heated up quick. I stopped and glassed the few remaining areas that were in the shade as I headed back, but didn’t spot anything. Next time I will focus more on high elevation north slopes if it’s still really hot weather. I now feel I know the area good enough to effectively hunt it for both Deer and Goats, so progress was made despite only seeing one Goat. The fact that the Goat was alone suggests it was a billy, but it’s body size just didn’t strike me as big. It still has my curiosity though, so we will see what happens in the next few months.