I headed out of the house the morning of July 19th for an overnight scouting trip into one of my favorite areas. Although I have a once in a lifetime Idaho mountain Goat tag, I will still be hunting this area at some point this season for Elk and Deer. It was time to set out some trail cams and scout the Elk area and see how big the Bucks are for this year. Despite the extra weight of the trail cams I still made it to my camp location in just a few hours. I jumped a Forky and a Doe on the end of the ridge heading to the camp spot, so things were looking good so far.

Camp was set up in the same spot I have been using for three seasons now. It’s a dry camp on a low saddle along a main ridge and about half a mile from water. This really cuts down on any issues with bugs. 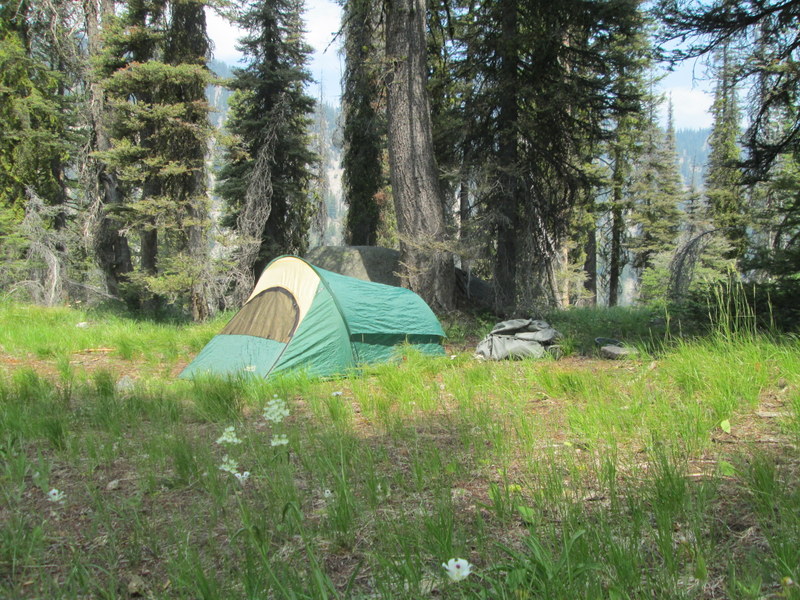 After camp was set it was time to go set out the trail cams in the high park. I saw about the same amount of Elk sign as I saw last year during the summer. The Elk seem to move through here in early summer and then come back in August after the first frost hits the highest elevations. I set one camera out in the same location as last year and one on the far side of the park in some timber, both in video mode this time. By having two seasons worth of footage on the same park I can draw some more concise conclusions about the area. I’m hoping to get some rutting action and see what the herd bull quality is like in this area. I know there are some nice bulls based on last years footage, but I am not sure if they are rutting in the area or just passing through. I will also be archery hunting the area during the rut this season and so that hunt combined with trail cam footage will shed some light on the subject. The Archery hunt will probably be the first time I get to check the cams. The rest of the scouting trips for this season will be dedicated to Goats.

After setting up the cams, I explored the area a little more looking for fresh Elk sign and potential wallows. No fresh Elk sign was found but I did find this fairly fresh tore up mouse which is probably the handy work of a Pine Marten.

Next I hiked up to a basin I had never been to before. There was a nice little bench on the way up that had a small creek going through it. This might be where I camp during the Archery season when there is less bugs. It’s in a good strategic location to both hunt the park and glass the basin above it.

The basin above this little bench looked better than it did on topo maps and Google earth. It was huge and mostly timbered. I will be watching this place for sure. I did see fresh Deer tracks going up along the side of it in the timber in the same direction I was going to glass from. This was encouraging, even if it was a Doe. Despite it being the middle of the afternoon, I still sat and glassed for a couple hours. I was interested in learning the nuances of the basin and surrounding terrain and not expecting to see any animals.

It was a challenge to not walk around through the bottom and the adjoining timbered benches and look for tracks and sign on the way out. That spine in the middle is a great place for a Buck to bed! It would also be a great place to glass from, and I just might opt to risk it in the future. I halfway wanted to watch that basin til dark, but the slope next to camp is where I know there are some Bucks to watch. I’ll come back to this basin when I have more time and can glass it in the morning. Mornings are a lot more productive, especially when it’s hot.

After stocking up on water I hiked back to my glassing spot next to camp for the evening. As usual this time of year the deer don’t come out to feed for the evening until it’s almost to dark to glass on this slope. I watched a Doe and a fawn on the upper third of the mountain feed for about five minutes before it was to dark to see.

The next morning I glassed the usual spot and didn’t see anything all morning. Finally at about 9:30 AM with the sun high in the sky, I headed back to camp to pack up and head out. On the way back to camp I saw the orange hue of either a fresh log or a velvet buck across the canyon. I quickly checked with my binos and it was a Buck! I set up and watched this Buck feed by himself and mess around for about an hour. He would get frustrated with the bugs and bolt downhill every once in a while, then continue feeding. Typical young Buck behavior. He for sure wasn’t the Rolling Stone Buck,  but he was one of the other two that were with him last July. This Buck made his way downhill and eventually disappeared in the timber in the bottom of the canyon. Odd behavior for a Buck, they are usually known to head uphill in the morning to bed for the day. Maybe he was thirsty or was going across the canyon to bed on the cool north slope.

I can’t really tell for sure which Buck this was. He seems kind of small to be “Sleepy”, but the tall antler configuration is similar. The forks are not deep so it could be the 3 point from last year who would now be a young 4 point.

On the way back to the trailhead I took the same Elk trail I had took on the way up, stopping along the way to snack on some currant berries that where ripe. I then decided to pick up the pace in the steep loose sections and do some foot sliding. I wasn’t being very sneaky at this point and I was almost to the bottom when I slowed down and hit another section of Elk trail. As I took a rest in the shade of a tree I saw the white face of a Buck at about 40 yards starring at me through the trees. I slowly brought up my binoculars and could see pieces of decent sized antler. He was a mature Buck, but I couldn’t tell which one.

I slowly traded my binos for my camera and got a picture. The stare off lasted another 30 seconds and he turned around. When he did, I got a glimpse of another Buck trotting away behind him that could only have been the Rolling Stone Buck. The body was very large and  the parts of antler I saw had mass. I hustled to my left maintaining my elevation hoping to get a good look at them, but all I saw was dust when I got to where it opened up 50 yards to my left. I didn’t expect this at all, especially being near the bottom of the mountain. This was a new area for me to see Bucks in as well. I hope they stay on this ridge because I’ve been up and down this ridge every which way and know it well. Also it’s half the size of the mountain they are usually on, so it will not take me 6 hours to get to them after I spot them.

This encounter for sure changes my Elk hunting plans for the area. Now I will probably glass that ridge first during the Archery season, then go for Elk in the park.