I made this two day trip starting on June 21 of 2013. This is the first follow up trip to the previous post “300 inch Bull” and the sole purpose of this expedition was to find a better passage into that Hell Hole of a basin. I didn’t do a whole lot of glassing or see a wide variety of animals on this trip, but I did get into the basin and it was in deed full of Elk.

I left the trail head mid morning at about 10:30 AM. It is now late spring with only a slight chance of rain in the forecast. The cool cloud covered hikes are mostly over now and the stagnant lower elevation heat has taken hold. The trail is in full use at this point, with the deer and elk tracks being replaced by hikers and bike riders. Had I not scouted this area early in the year before all the human activity started, I probably would have had very little confidence in it.

I brought a hand held pair of pruning shears with me on this trip, and started cleaning up the trail after getting in a couple of miles. With the animals up higher now, the ticks this time were not nearly as bad. I crossed the creek at the same spot and noticed the water level was kind of low for this time of year. 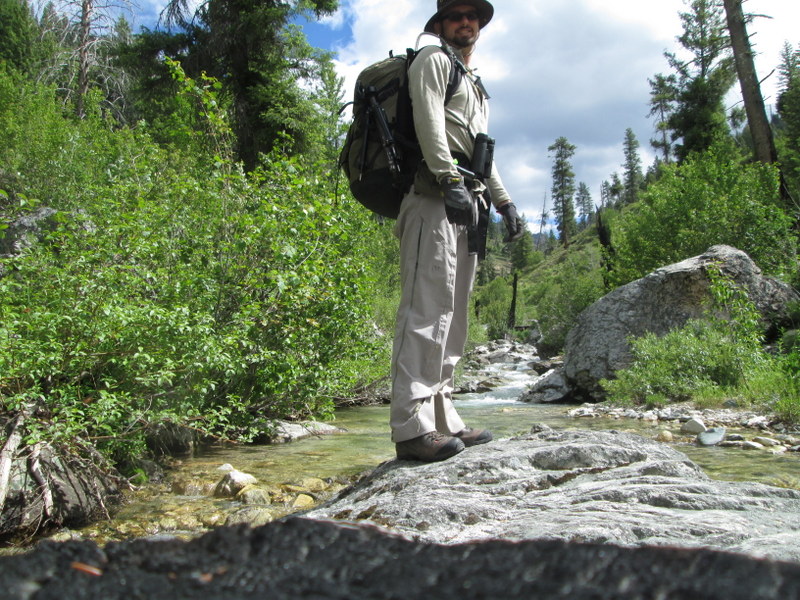 Upon arriving at the feeder creek I planned to hike up, I ate and replenished my water. I usually start my hike with a full water bladder even when I’m hiking along a creek like this. This is partly out of convenience and partly out of preparedness, but mostly out of habit. Since the water level was lower I decided to try and see if I could break trail along the feeder creek that comes out of the basin. After an hour of custom landscaping along the creek, I had only gotten a little further than last time and gave up. I was just going to have to suck it up and hike up the steep hillside then side hill it into the basin. So I hoofed it up the steep slope a couple hundred feet and traversed up the canyon above the feeder creek. It was a difficult and frustrating section that lasted a couple hours.

I finally arrived to where two creeks came together to form the feeder creek I had been following. The ridge in between these two creeks is where I had seen the Elk last time and seemed like a good place to set up camp. I found an old beer can from the late 70s in one of the flatter spots. Could it have been a celebration after harvesting a big Bull? Or maybe the hunting sucks in that basin and the only thing fun to do is get drunk. Either way, I doubt these guys are able to make this hike any more so I will probably have the place to myself if I come back during the hunting season. 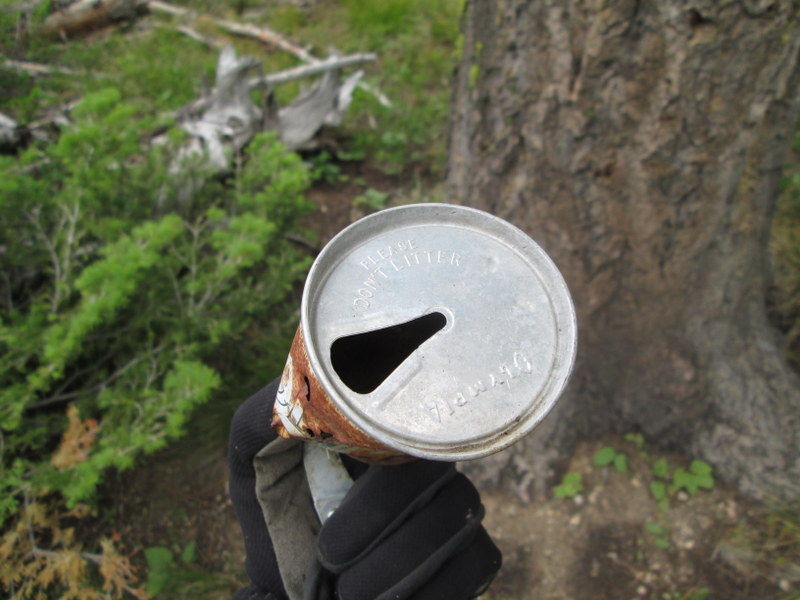 After searching around for about an hour I had to settle for a less than ideal (and flat) camp location. After setting and resetting my Supertarp a few times I was able to get a decent set up; the Supertarp is flexible in that way. It was a tight area and I had to get the orientation just right in order to be able to lay in the flattest spot. This is pretty much the norm in some of these back country areas that hold animals around here, it’s just not flat.

After setting up camp and eating I headed up the ridge to explore and do some glassing. Calling this area a “basin” is really not that accurate, it’s more like 2 parallel canyons and I’m camped at the foot of the middle ridge. On a larger scale it will pass for a basin though. I had brought a trail camera with me and decided that I would set it out way up on that ridge and hopefully get an idea of whats really in that area.

I spotted Elk bedded down across the canyon from my first glassing spot, so I moved up the ridge a little farther to where I was directly across from them and watched for a while. There were about 20 spread out across that hillside bedded down. Within that herd there was about 5 calves and 4 spikes, a fairly decent ratio of ages and genders but could be better. It would take a big Bull to run all those cows though and I will do my best to get back in there during the rut to watch.

As I crept up the ridge farther doing my best to stay out of sight from the bedded Elk, I noticed fresh Elk tracks and scat in the trail. The further along I got the more there was and I knew something was going to happen soon. When I got to a bench in the ridge I heard the bark and looked below me. There were 4 cows, 1 spike, and 7 spotted fawns coming out of a mellow coulee and trotting away. Great recruitment in that little herd and really reassuring to see. I watched them quarter away and follow the contour of the mountain to the other side of the canyon, which was a lot wider this far up. They settled down on the hillside across the canyon about a mile farther up the ridge than the other herd. I was really glad they didn’t head over towards the other herd and blow them out of there.

I kept going up the ridge until I found a good pinch point in the trail and set out the trail camera. This camera is way in there at this point and realistically I may not get back to it this year. I then glassed my way back down the ridge and didn’t see any deer, just the Elk. This is not uncommon, the Elk seem to push the Deer out of the better areas in some places, especially in the summer range where there are lots of places to go. Bucks especially just don’t seem to like the herd activity of the Elk. I think it may be due to the fact that a herd of Elk attract both Wolf and Man, are noisy, and smell.

The next morning I headed up the ridge again to do some more glassing, this time focusing on the other side of the canyon. I heard the nervous grunt from an Elk and saw a lone Cow that was below me and about 500 yards away from my camp. I answered her with a chirp and she shortly went back to feeding. I spent the rest of the morning glassing and didn’t spot anything new so I packed up and headed out. I potentially had a long hike out ahead of me and wanted to get an earlier start.

I exited the basin a little higher on the hillside and found the main game trail, this was an iconic moment and exactly what I made the trip for. I knew these animals were getting in and out of this basin somehow, and this was it. It was a well used trail for the most part and fairly flat following a steady contour along the mountain but way above the feeder creek. I trimmed the overhanging brush and trees in some spots and really opened it up for both me and the animals that use it. Clearing and knowing the trail really helps for the pack out, it could save you days. It led right out of there, around the mountain, and to a northerly slope feeding area. I took mental note of that and then started the descent down to the main trail. I was a bit farther up the mountain then I would have liked to have been, but the ease of which that trail traversed about a mile of steep slope made it worth it. Besides, if it was easy to get in there then the spot wouldn’t be so good. I made it down and then started to clean up the main trail again on the hike out.

It was a long hot hike out and I was again reminded of how far in I had been. This round trip would best be made in 3 days instead of 2. All the pruning I did along the way made it take a lot longer as well.  While I didn’t find any big bucks or bulls on this trip it was super successful in knowing the area and learning the best access. This is a prime example of the benefit that scouting gives. I can now go back at any time and know right where to go and how best to get my meat out.